In the past several years, FlexFilms has invested strongly in the research and development set up at its Kentucky plant in the Southern United States. We reported on some of the new films being developed by FlexFilms in our review of PackExpo in Chicago, where we met up with the young president of FlexFilms, Anantshree Chaturvedi. Recently, FlexFilms has come up with Asclepius – a new series of films based on 90% post-consumer recycled polyester. These films, which are under patent application, have been certified by Kingfisher. Details of the FlexFilms Asclepius series are given below. Meanwhile, we report on Naresh Khanna’s telephonic interview in which he resumed the conversation with Chaturvedi.

Naresh Khanna, editor of Packaging South Asia (hereafter NK) – Anantshree, when we met at PackExpo and talked about ‘green’ films, you said that the market was not ready for them in some respects and even the brand owners seemed reluctant to change over to new materials. Has the situation changed now?

Anantshree Chaturvedi, president FlexFilms International (hereafter AC) – The market has moved so quickly over the past six months that the world is a totally different place today. Consumer trends have changed so much over the past few months. There are a whole bunch of young brands, new people who are entering the food, wellness and health space. Whether it is Ayurvedic or energy brands, these entrepreneurs have strong social media branding and a robust consumer base. They come back to us and actually say that they can move 30% more of their new products but they need sustainable packaging. Even generic brands such as Costco and Kroger have started using PCR-based materials for their packaging.

These brands and their packaging converters are quite aggressive about trials with the new 90% PCR films and they are aggressive about getting approvals. A great deal of the push has really come from the label industry, especially from UPM with its balanced approach to producing labelstock from recycled PET materials.

Our Asclepius is the only 90% PCR film that is Kingfisher certified. We have been able to close the supply chain loop with perfect synergy in a perfect circle of recycling polyesters from the bottom grade to the top. More than 90% of the time we get a perfect grade of certification, the triangle with the 1 in the center. In early 2019, AIMCAL also recognized the film with the ‘Excellence in Sustainability’ award due to the technology and cost these films offer to the market.

AC – First of all, you have to do all the same value-adds as on any other film. We have made the adjustments. The reason why our PCR film is so successful is that we are able to use the inherently superior thermal properties of polyester and thus far have found the optimum level of PCR that we can use is 90%.

The challenges have been met as far as optimizing the runnability and sealing – these have been completely matched with polyester. This means that it runs at the same speed as any of the films that are normally used in similar applications.

NK – Is there a price premium for Asclepius?

AC: On the pricing it does command a bit of a premium but with volumes it will be pretty much the same. I had to take an economic call, where if I had a price that was higher I could not sell the volumes that I need to manufacture the film. The overall volume we have started getting is only 20%. But it must be kept in mind that 20% from nothing in just a few months is a phenomenal rise.

NK – How do you acquire the production waste and what is the collection workflow?

AC: This is one of the most interesting parts of the whole challenge. Initially, when we started off, we thought we could get it from the recyclers, the marketplace, local recycling bodies, various government bodies of which there are many in the developed world. We have given the polyester waste an economic value. It was a challenge before but it has become easier; especially polyester waste which will grow in value with time.

In some cases we have come across useful suppliers of polyester waste. For instance, even though we don’t have a plant in the UK, we have a very good setup there to get waste material that we can send to our film plant in Poland for recycling.

We are trying to gear up the waste collection and are in the process of collecting, sorting and recycling it in all our plants. Europe is far ahead in recycling and optimizing since the sorting is done by the consumers themselves. While the US is far behind, there is enough polyester waste collection.

Although collecting and sorting waste is a big business in America, getting high quality waste is a challenge and we have to do the sub-sorting ourselves. We are working on automating this and with the right volumes it will become viable.

NK – What are your initial markets?

AC: The whole thing was developed and optimized in Kentucky. The American R&D of Uflex has delivered. All of the initial work, the R&D was done in the US.
However, while the first Asclepius films were produced in our Poland plant, the real initial markets for this product are in the NAFTA region. We are producing it in Kentucky. This is the first big thing coming out of our investment in the research and development in the US. Asclepius is designed in Kentucky and made all over the world.

Packaging is increasingly appreciated as a key asset for brands to display and communicate their sustainability credentials to their consumers. Since packaging is inalienable to the overall product experience, it finds a special place in the sustainability narrative.

Uflex Group has been a trendsetter when it comes to sustainable innovation, and its global film manufacturing arm FlexFilms has developed a PCR grade film containing minimum 90% post-consumer recycled PET content. These films were brought to the market in late 2017, as a pilot project with its debut film F-PCR. Amidst encouraging feedback from the industry, FlexFilms has expanded its portfolio and is now offering an entire bouquet of 90% PCR grade films with enhanced sustainability and low carbon footprint for its customers, under the brand name Asclepius.

FlexFilm’s Asclepius patent pending film technology is a family of plain, treated, coated, high barrier and heat-sealable BOPET films based on 90% PCR polymer content. This film represents a 75% reduction in carbon footprint versus virgin BOPET grades. Customers have started to use these films in a range of packaging and labelling applications in order to help achieve high sustainability goals as defined by various third parties, and often requested by large global CPGs.

While lower levels of PCR content have been available in BOPET films, Flex’s technology pioneered an extremely high level of PCR content as is needed with the accelerating greening demand of the global economy. This is the only 90% PCR BOPET film that has received the prestigious ‘Kingfisher’ certification from SCS Global Services that certifies that FlexFilms’ PCR grade films contain minimum 90% post-consumer recycled PET content. This certification corroborates to its customers and to the flexible films market, the integrity of its supply chain and claims regarding PCR-based film technology. In early 2019, AIMCAL recognized the film with ‘Excellence in Sustainability’ due to the technology and cost these films offer to the market.

Consumer brands that embrace high PCR content film early will be able to build a more resilient and closed-loop system than ever. Cost-effective innovation in the green space is what is absolutely necessary to drive acceptance globally and the recyclable Asclepius films from FlexFilms delivers on that promise of achieving sustainability goals faster for the consumer products industry. Asclepius films have a significantly lower net energy requirement for production when compared to virgin films, which is established by its Life Cycle Analysis.

Asclepius’ new range of low carbon footprint grades is available in most common converter grades for construction of low carbon footprint complete packaging constructions. Print webs, metalized webs and sealable webs are available to be processed into a total package. The Asclepius range of films can be used for a host of applications like aqueous lamination, lidding base film, coffee and snacks packaging, and high-bond liquid packaging. 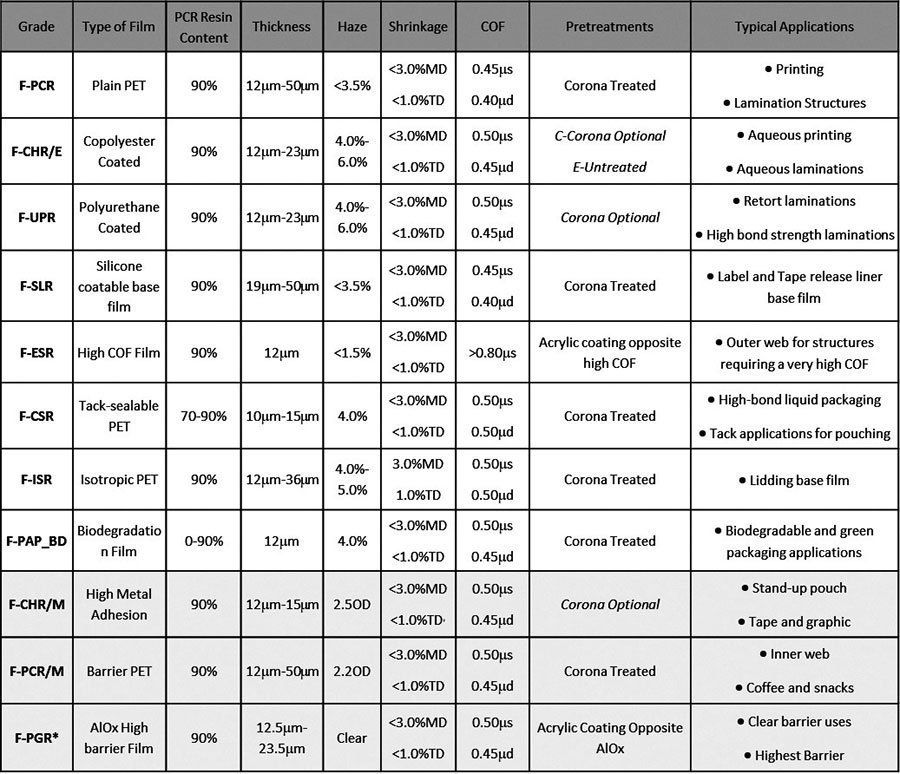 A multi-channel B2B publication and digital platform such as Packaging South Asia.is always aware of the prospect of new beginnings and renewal. Its 16-year-old print monthly, based in New Delhi, India has demonstrated its commitment to progress and growth. The Indian and Asian packaging industries have shown resilience in the face of ongoing challenges over the past three years.

Pelican showcasing its new developments for flexible packaging at K 2019

IppStar Survey – recovery in the times of Covid-19, results out...