That’s the claim made in an exclusive report urging immediate action to step up waste management worldwide. It comes a year after David Attenborough’s BBC series, Blue Planet II, horrified the UK with powerful images of wildlife harmed and slayed by plastic pollution.

“We have no right to harm the lives of other creatures by allowing plastics to get into the ocean,” said Brunel University London Professor, Edward Kosior. Launching the report at Ocean Plastics Crisis Summit, Professor Kosior said, “This dire situation calls for strong and immediate action to slow the rate at which waste is produced. . . . We have to end this dig-use-discard mentality. Every package that’s made should be recyclable. There’s no excuse. It is a must for all.”

The report says caps on plastic waste and stamping out waste mismanagement by the top 10 polluting countries could cut ocean plastics by 77%. That would reduce yearly volume of plastic going into the oceans to 2.4 to 6.4 million tons by 2025. Speaking at London’s Royal Geographical Society, Professor Kosior, who runs recycling company Nextek, dubbed the UK’s export of plastics recycling to China ‘scandalous’ because it stops developing recycling here. Professor Kosior is also an environmental chemist and honorary professor at the Wolfson Centre for Materials Processing at Brunel University London. The report, ‘Stopping Ocean Plastics: An Agenda for Action’, is sponsored by Artists Project Earth and was launched at The Ocean Plastics Crisis Summit at London’s Royal Geographical Society.

“Developed countries need to invest in developing countries with global support from the UN,” he said, to help poorer countries better manage their waste. Calling for ‘a paradigm shift in waste management,’ Professor Kosior added, “The global magnitude of the problem means it needs to be on the agendas of international leaders such as the G20 summits, UN Assembly and World Economic Forum.”

What the report says

Co-written by Irene Crescenzi, ‘Stopping Ocean Plastics: An Agenda for Action’ highlights how:
plastics use is growing in line with wealth; the biggest plastic leaking countries are China, Indonesia, Vietnam, the Philippines and Sri Lanka; the many international laws already 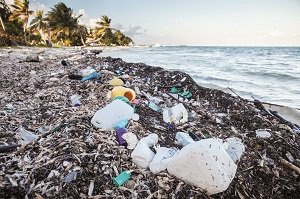 there to stop plastic pollution are not upheld; richer countries need to pay to help poorer countries deal with plastic contamination; and, we need to cut out single-use plastics and incentivising collection and recycling.

A multi-channel B2B publication and digital platform such as Packaging South Asia.is always aware of the prospect of new beginnings and renewal. Its 16-year-old print monthly, based in New Delhi, India has demonstrated its commitment to progress and growth. The Indian and Asian packaging industries have shown resilience in the face of ongoing challenges over the past three years.

New KHS machine processes can toppers made of cardboard

EPR for packaging to cost between GBP .5 and 1 billion...